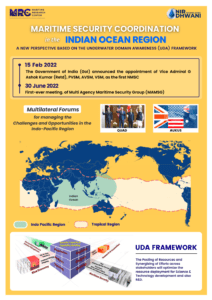 The tropical littoral waters of the Indo-Pacific region suffer from unique challenges on multiple counts.

The National Security Adviser (NSA), Ajit Doval, addressed the first-ever meeting of the Multi Agency Maritime Security Group (MAMSG) on 30 June 2022. In his address, he was firm that India was on the path of achieving its rightful position in global power play. However, he added that the glory would come only if we were able to put in place a strong maritime security apparatus. He acknowledged the changing scenario in the Indian Ocean Region (IOR), from a peaceful to a far more competitive region that may lead to confrontation. He reiterated that as India grows economically and otherwise, the security vulnerabilities will increase and become more complex. The appointment of the National Maritime Security Coordinator (NMSC) will be the focal point to bring synergy in the maritime security domain and galvanise coordination in various aspects, including operational matters.
Earlier on 15 February 2022, Government of India (GoI) announced the appointment of Vice Admiral G. Ashok Kumar (Retd), PVSM, AVSM, VSM, as the first NMSC. Former Vice Chief of the Indian Navy, Admiral Ashok has significant understanding of the ongoing geopolitical and geostrategic realities to deal with the challenges in the new global order. The first MAMSG meeting on 30 June 2022 was chaired by Vice Admiral G. Ashok Kumar, and was attended by top maritime and coastal security brass from all 13 coastal states and union territories, as well as Indian Navy and other Central agencies. The several agencies, under different authorities and with different mandates have been functioning with duplication and at times leaving gaps in the security matrix. The changing strategic dimension in the IOR demands a massive overhaul of the existing structures and deployed assets.

India has been extremely proactive in the last two decades to recognise the maritime potential and driving policies accordingly. The post Pokhran-II budget by the Vajpayee government provided the Indian Navy its highest share of defence expenditure since Independence. It was for the first time that the Indian Navy received a double-digit allocation in the overall defence budget, of the order of 14.51%, which was a 25% increase from its Revised Expenditure of 1997-98, and a massive 44% from the Budgetary Expenditure (BE) of the previous year (1997-98). Pokhran-II was a massive geostrategic event to assert India’s geopolitical position in the global power play. The maritime role in the nuclear doctrine has a critical dimension, not known to many. The No-First Use nuclear doctrine announced by GoI raises the question of credible second-strike capability, which can be nothing else but a nuclear submarine with a nuclear tipped missile. The Vajpayee government is also credited for putting in place the office of the National Security Adviser (NSA), based on the recommendations of the K. Subrahmanyam Committee report, post the Kargil conflict.

The significant budget allocation to the Indian Navy encouraged the naval commanders to start working on a long-term perspective. In October 2006, the Indian Navy published a first of its kind document titled “Freedom of the Seas: India’s Maritime Strategy”. The document was classified, but a component of it was released for civil society to appreciate the larger maritime vision. This followed multiple revisions of the Maritime Military Strategy, however the comprehensive Maritime Strategy encompassing all the maritime stakeholders remained a work in progress. The launch of the first indigenous nuclear submarine INS Arihant, in 2009, was another major milestone in our maritime security preparedness. An indigenous strategic submarine capability is a paradigm shift and addresses multiple dimensions of the national security matrix.

The Security And Growth for All in the Region (SAGAR) declaration by Prime Minister Narendra Modi has been the most significant and first of its kind foreign policy declaration in May 2015. It envisages leadership role for India in the IOR and also recognises the security concerns and growth opportunities. The GoI, on its part, has announced significant policy initiatives to complement the SAGAR vision. Mega projects like Sagarmala, Bharatmala, Gati-Shakti and many more are a few of the initiatives to build internal capacity and infrastructure. All these projects are being monitored at the highest level and aggressive inter-ministerial policy support is being provided for seamless and timely implementation. The Honourable Prime Minister has been repeatedly emphasising on the maritime dimension at multiple forums and providing structural push at all levels. Right from his address to the UN Security Council in August 2021, where he highlighted the need for international cooperation for enhancing maritime security to the Quad meeting in Tokyo in May 2022, the emphasis on maritime security and international cooperation has been the critical take away.

The announcement of the Chief of Defence Staff (CDS) in December 2019 and late Gen Bipin Rawat (Retd), taking over the position on 1 January 2020 were a significant policy decision to bring synergy and enhance civil military coordination. One of the major tasks initiated by the then CDS was restructuring of the Armed Forces into Theatre Commands, including one for Maritime, based out of Karwar in Karnataka. Even the implementation of the Shekatkar Committee report on enhancing the “tooth to tail” ratio was also one of the priority areas of the CDS. The restructuring would allow strategic resource allocation for modernizing the armed forces, while making it lean and abreast with the changing dimension of security challenges. There has been relentless effort by the Government to keep up with the geostrategic developments and prepare the nation to face the new challenges. Economic growth has kept pace, irrespective of the headwinds due to the pandemic and other global events. India has increasingly stood up to geopolitical pressures and taken diplomatic positions to suit its long-term strategic interests.

The IOR has assumed greater strategic significance in recent times. The Indo-Pacific strategic declaration and the entire western bloc supporting it, is a geostrategic development with enormous maritime significance. The Indo-Pacific region, by definition, is the tropical littoral waters of the Indian Ocean and the Pacific Ocean. The corresponding announcements of Quad and more recently of AUKUS (Australia, United Kingdom and United States) are multilateral forums for managing the challenges and opportunities in the Indo-Pacific region. The Indo-Pacific region is also seeing a significant proliferation of submarines and even smaller developing nations with substantial economic constraints are getting into this bandwagon. The bigger worry is that these nations are acquiring the platforms from new markets like China, where the technology is still to be proven. This raises serious safety concerns, given the Argentinian Submarine ARA San Juan accident in November 2017 and the Indonesian Submarine KRI Nanggala-402 was lost at sea in April 2021, killing all the 53 sailors on-board. Even the Indian Navy lost a submarine, INS Sindhurakshak with 18 crew members on-board, due to a major fire on-board in August 2013. The US Navy suffered a major embarrassment in October 2021, when USS Connecticut collided with sea mount in the South China Sea. Thus both underwater safety and security become a serious concern in the new era.

The tropical littoral waters of the Indo-Pacific region also suffer from unique challenges on multiple counts. The political instability and volatility abet security concerns and encourages non-state actors to operate freely in collusion with extra-regional powers. Some nations are also encouraging non-state actors to operate as extension of their state policy, making it a complex mix of internal and external security concern. The disruptive and asymmetric edge available with the subversive elements, make it extremely difficult for the maritime forces to counter such threats using conventional military powers. The pre-modern states in terms of their governance mechanism also encourage fragmented approach among the stakeholders with least synergy and coordination. The economic status of these nations, builds significant competition among the socio-economic requirements to prioritise long term capacity and capability building initiatives. Indigenous effort to promote Science & Technology (S&T) becomes a casualty and thus these nations continue to remain dependent on the West for their security and economic requirements. The most critical issue is the sub-optimal performance of the sonars deployed for any underwater survey and surveillance. The degradation is of the order of 60%, making it highly ineffective in these waters. The West continues to push their hardware at substantial cost, knowing fully well that in the absence of indigenous effort to mitigate the tropical challenges, these equipment are ineffective. The tropical waters also present significant undersea resources and massive biodiversity for greater blue economic opportunities. However, the poor governance mechanism overwhelms these nations with the challenges and the extra-regional powers continue to draw the benefits of the enormous opportunities.

Conventional wisdom points to Maritime Domain Awareness (MDA) as the key to enhanced maritime governance mechanism to deal with challenges and opportunities. However, the MDA remained an event driven formulation post 9/11 in the US and 26/11 in the IOR. The excessive security centric approach limited the participation of the other stakeholders, making it extremely unviable to bring state-of-the-art S&T, supported only by the security budget. Atmanirbharta is a critical need, but requires a serious innovation eco-system and vibrant user-academia-industry partnership. The present MDA is limited to the surface and lacks a credible underwater dimension.
The Underwater Domain Awareness (UDA) framework proposed by the Maritime Research Centre (MRC), can comprehensively address the security challenges faced by the IOR today.